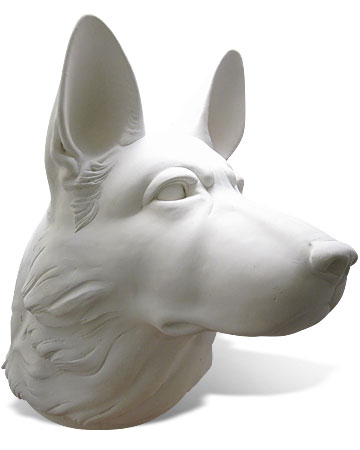 In the fall of 1998, Canine Training Systems was contacted by world renowned sculptor A. Thomas Schomberg about a memorial statue he was commissioned for that would stand to recognize and honor all military working dogs that served in battle. The commission was to commemorate the courageous acts of these dogs and recognize that their acts saved countless lives.

Funded by the public, Tom was determined to create a sculpture that captured not only the essence and character of the war dog itself, but the determination, courage and service that both handler and dog shared. It was also important to present the unique bond, trust and dedication to service that the veterans of war felt when recalling their canine friends unique toolset and the many times their lives were saved in the call of duty.

Tom was looking not only for a dog that represented many of those dogs in physical characteristic but also a dog that embodied the working character and mindset of dogs suitable for service. After looking at a few German Shepherds, it was decided that Dozer von Schneider was ideal. Dozer was a retired Police K9 that had attained SchH2 prior to an injury that shortened his working career. He had excellent character, was courageous and typified the ideal working Shepherd type.

Over the course of many months and trips by Doug to Schomberg Studios in Evergreen, CO, to model Dozer for Tom, the clay model was revealed. The process was incredible. Dozer was photographed from all angles, measured and posed so that no detail went overlooked. Because the memorial was to be 1.5 life size, it was critical that measurements were taken so that proportion to the handler and column was correct. The statue itself was of a combat soldier in relief against a pillar with his dog looking intensely to the side drawing the soldier's attention. 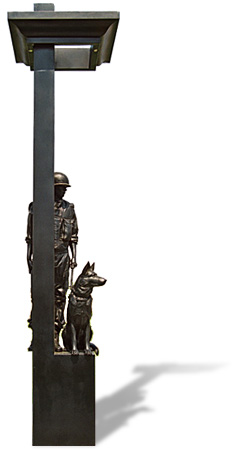 The pillar was to be lit from above, which would call particular attention to the dog but also his intense attention to the distance to indicate a possible threat. The handler's awareness of his dog's movements is captured perfectly. The incredible detail of the clay model was seen by only a few but the attention to detail was truly incredible. The buttons on the shirt of the soldier, the texture and wrinkles of his uniform fabric, the looping of the laces on his boots and buckle on his belt were so lifelike as to be beyond description. The anatomical correctness of the soldier's arm, wrist, hands and fingers grasping the leash through thumb and forefinger and its natural arc to the collar was masterful.

The musculature of the dog, the texture of his collar and lead and life like expression were truly incredible. The dog had brass pins placed for corneas and it literally felt like the statue was alive and following your every move. It was a truly incredible experience, one that won't ever be forgotten.

The statue was memorialized in two locations. The first was unveiled on President's Day in 2000 at March Field Air Museum at March Air Force Base in Riverside, CA and the second on October 8th, 2000 at Sacrifice Field in front of the National Infantry Museum at Fort Benning, GA.

Susan Barwig and I were present when the statue was delivered to be cast in Bronze in Loveland, CO and due to the process, the clay model was destroyed when the casting was made. It was truly an honor to participate in small part in it's creation and I hope you'll enjoy the photos and learn more about war dogs and their handlers. For more information about the dedication at Riverside, Ca please visit the website here.

A. Thomas Schomberg is a world renowned artist and has sculpted monuments at the Olympic Training Center in Colorado Springs, CO, the Felix Stamm Stadium in Warsaw, Poland, the Adare Manor in Adare, Ireland, the Butler Institute of Art in Youngstown, OH and the Rocky Monumental made famous in the movie series featuring Sylvester Stallone at the Philadelphia Museum of Fine Art among many others. To learn more about Schomberg Studios, please visit Schomberg Studios.

In the summer of 2001, Tom and Cynthia Schomberg called and said they were in the area and would like to stop by. Upon arrival, they presented me with a clay bust of the War Dog to memorialize the life of Susan Barwig, who passed away in 2000. Sue was incredibly proud to be a part of the memorial and is greatly missed for her contribution to dog sport, the German Shepherd and Canine Training Systems. The bust can be seen in the photos below.